On another post we outlined 5 Reasons why Gas Prices are Destined for Huge Profits – significantly better than they have been for the last 3 years perhaps reaching 2014 highs and beyond. Below is an article that corroborates what we said in that article, and is provided here in full for your review.

Natural gas storage is at record low levels but prices are falling going into winter heating season. Markets seem to be betting that wellhead supply will be sufficient to cover demand this winter. That may be but at what gas prices? This is a game of natural gas risky business.

Natural gas 6-month calendar spreads moved in backwardation in early September and climbed to +$0.57 on October 9. Henry Hub spot prices reached $3.28/mmBtu but both spreads and price have fallen since then (Figure 1). 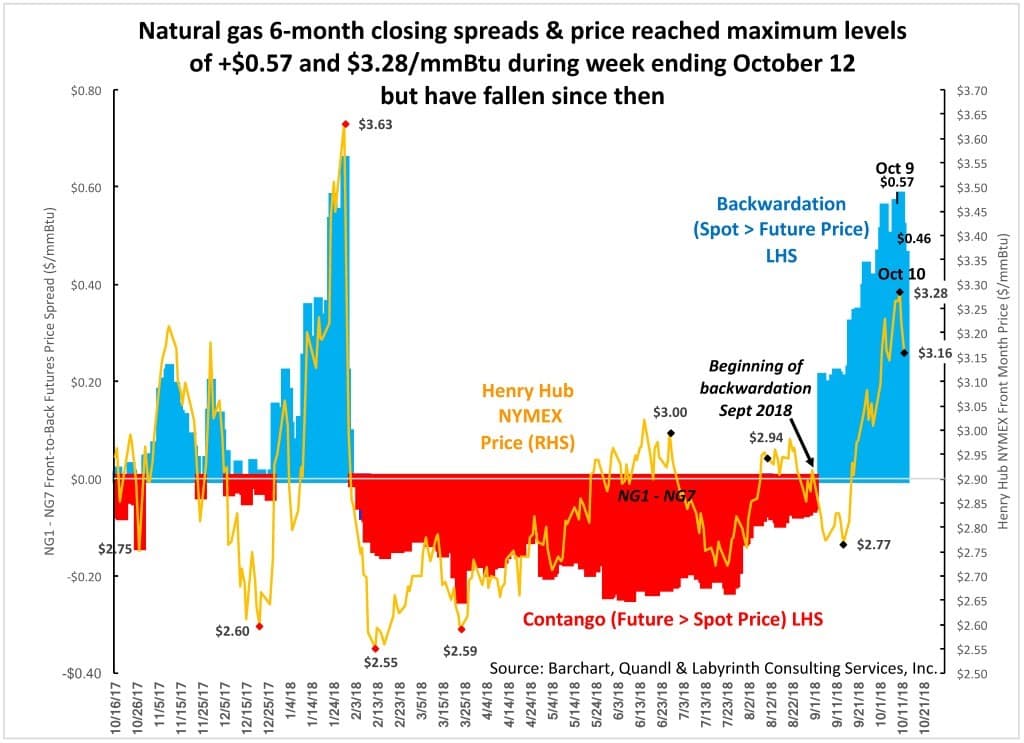 The upward movement of prices and spreads were a long time coming considering the massive storage deficit that began in October 2017 (Figure 2). Current storage is -493 bcf less than the 5-year average and we are only a few weeks away from the beginning of the 2017-2018 winter heating season. Storage is an almost unbelievable -693 bcf less than during the same week in 2017 and yet, markets are seemingly unfazed! 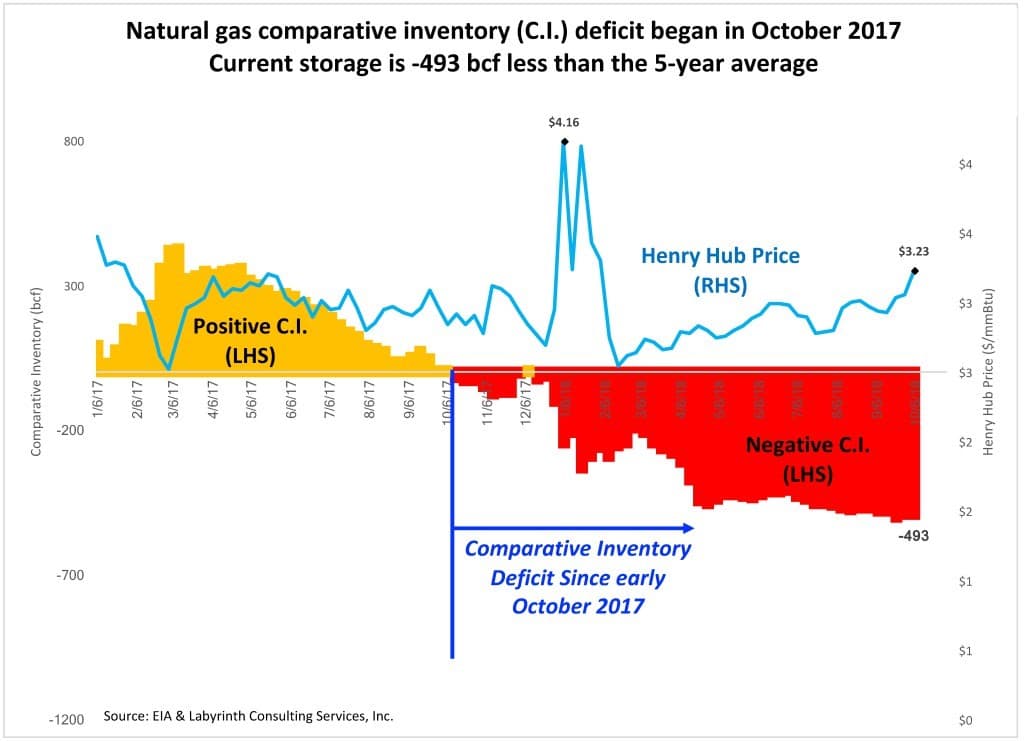 This has led to the lowest end-of-storage (EOS) level in history. October working-gas-in-storage (WGIS) is only 3.29 tcf and a projected monthly average C.I. of -400 bcf is also the lowest in history for October (Figure 3). 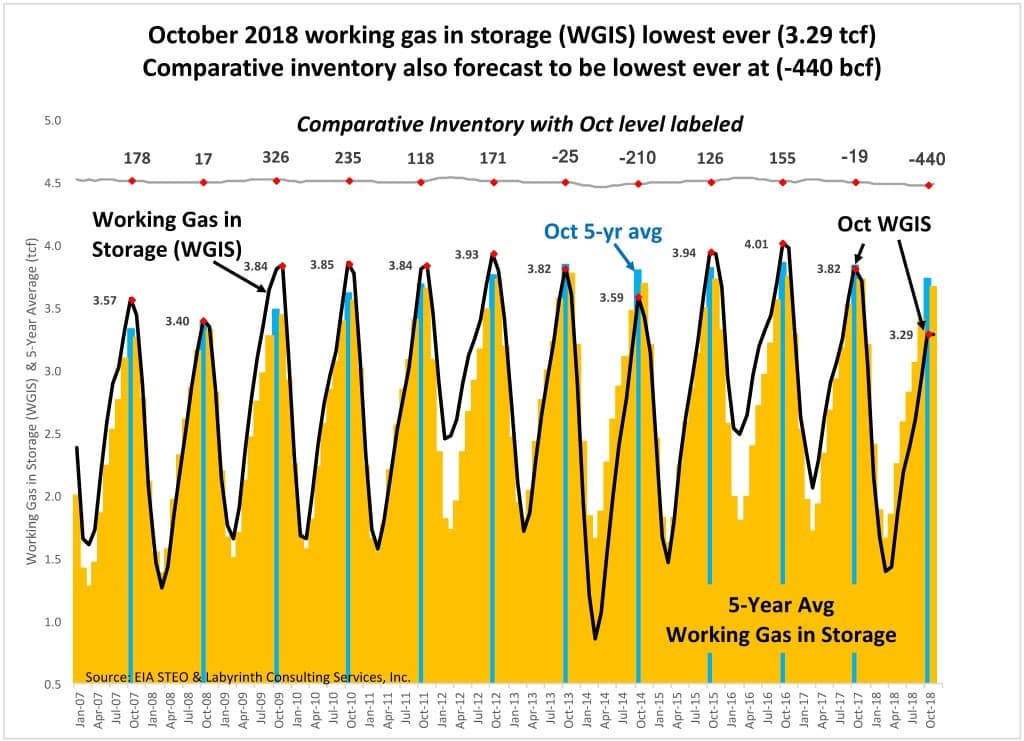 That gas output surge has given markets comfort that wellhead supply may be adequate to compensate for the storage deficit during the coming winter. The problem with that logic is that gross gas supply—production minus exports—is not very comforting.

LNG (liquefied natural gas) exports by tanker and pipeline exports to Mexico and Canada have been steadily increasing. Exports reached 3.25 bcf/d in September and are projected to increase to almost 9.5 bcf/d by November 2019.

The result is that despite growing production, gross gas supply may have already peaked and is on track to decline going into winter (Figure 5). 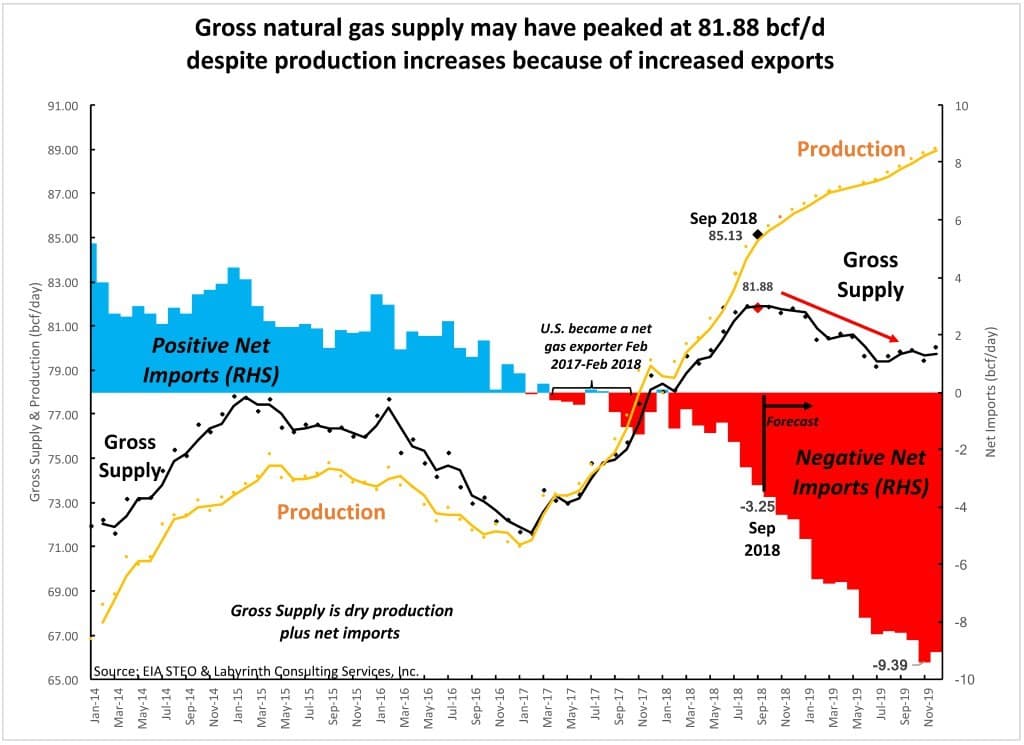 It is unclear why markets are making what seems like such a risky bet on supply when history suggests a clearly negative outcome for price. 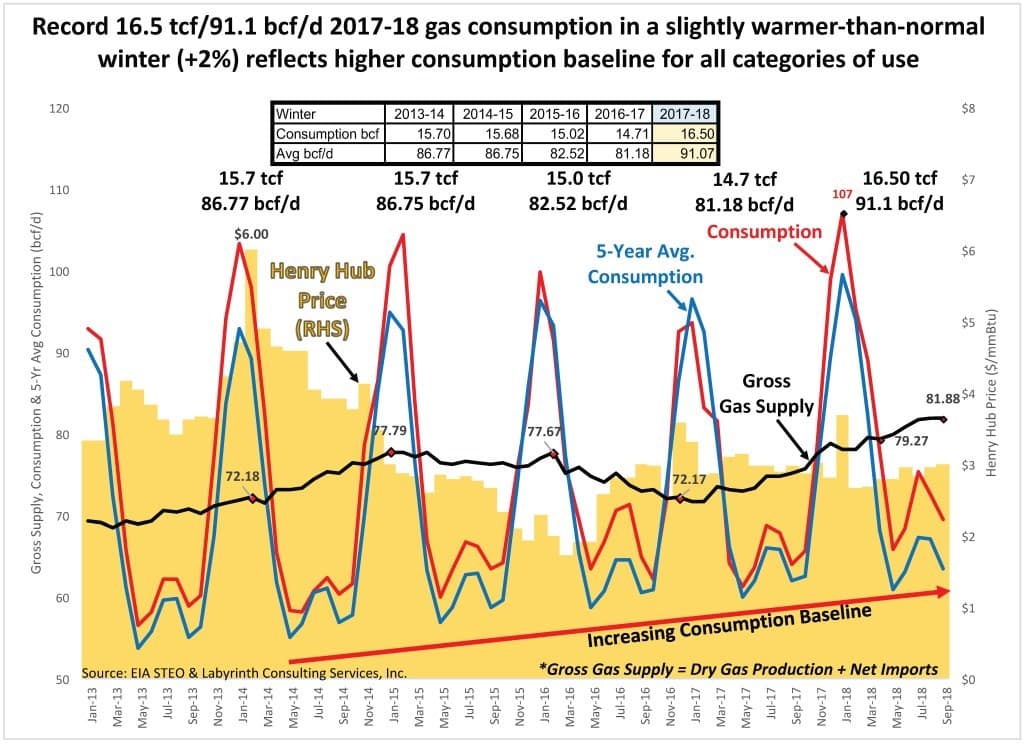 It is unlikely that the U.S. will have an overall gas shortage this winter but it is probable that prices will move higher as inventories are consistently drawn down. A normal winter will lead to short-term price spikes in local markets similar to what occurred last winter. History suggests that prices will almost certainly reach $4.00 to $4.25 weekly averages during the coming winter, and that much higher prices are possible.

Americans have considerable faith in the wisdom of markets. It is worth noting that what markets do best is to force efficiency. That sometimes comes only after they occasionally get things wrong.

This article was originally posted on oilprice.com by Art Berman who has been interviewed about oil and gas topics on CBS, CNBC, CNN, CBC, Platt’s Energy Week, BNN, Bloomberg, Platt’s, The Financial Times, The Wall Street Journal, Rolling Stone and The New York Times.